Starting the game UNO came out strong defensively led by Felipe da Silva who was named co-defensive player of the week in the Summit League this week. Da Silva was all over the field in the first half making tackle after tackle and running down errant passes, playing the role of defender in good form. And it paid off. In the 42nd minute, UNO was awarded a penalty kick and sophomore midfielder Emir Alihodzic rattled it right past the UWM goalkeeper for a 1-0 UNO lead. Head coach Jason Mims said his team had the advantage in all areas in the first half.

Momentum can be unpredictable and fickle in the arena of sports. UNO saw first-hand Wednesday just how treacherous the â€œBig Moâ€ can be. During a nine minute span the Mavs went from leading by one goal to trailing by two. The three goal difference was spurred by UWMâ€™s leading scorer Laurie Bell, who had a goal and an assist. UNO was downed 3-1 following the scoring barrage. Mims said his team is still learning how to compete at a high level for 90 minutes.

â€œIâ€™m proud for the fact that for 60 minutes they saw what they could do defensively,â€ Mims said. I just think that we got to get a little more going forward. I think we are a little bit tentative and little bit scared. Itâ€™s almost like the 1-0 lead was almost bad for us because we kind of sat on that and said â€˜okay letâ€™s just keep this 1-0 lead and not bring anybody forward.â€™ That wasnâ€™t the plan, we wanted to get guys forward and keep on playing but you know they tied it up and (the team) got down.â€

Coming into the game UWM had better stats than previous UNO foe Creighton, who is ranked fourth nationally. Before the 3-1 win the Panthers scored 18 goals in eight games. In the same time theyâ€™ve allowed only six goals. Mims said his team is making progress and after playing six games in 20 days his team will get back to a normal one game per week schedule.

UNO is now on a three game road trip. The Mavs take on Indiana University-Purdue University at Indianapolis Saturday in Indiana at 6pm. Then UNO travels to Nashville for a match with Belmont. 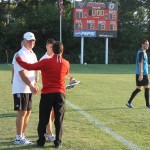 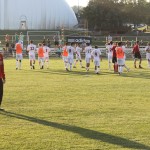