Mavs stampede Coyotes in the rain 2-0

Omaha, NE – On a bitter cold rainy Sunday afternoon the Mavericks and Coyotes met to play a once postponed game.

The game between the University of Nebraska at Omaha and the University of South Dakota was originally scheduled for Friday afternoon, but was pushed back to Sunday due to foul weather. Both teams still fought showers Sunday as well as a constant wind. UNO came out strong in the first half, scoring in the sixth minute off an Ava Doetsch goal. Then in the 35th minute, sophomore forward Chelsi Rohloff played a Monica Bosiljevac pass over USDâ€™s Mackenzie Viktor for the a 2-0 lead. The Mavs would stop all USD advances and win 2-0. UNO head coach Don Klosterman said his team showed character grinding out a win in shoddy conditions.

â€œObviously the weather conditions (made) it a very difficult game,â€ Klosterman said. â€œBut I was really proud of the way our guys just didnâ€™t let that bother them, they came out and played really hard. Especially in the first half, playing against the wind, playing against that rain and we scored two goals and that is big.â€

South Dakota (5-4-3, 0-1-0 Summit) had come into the UNO game going 2-1-1 in their last four games, their only loss was in overtime against Drake University. Klosterman said his team rose to the challenge and played solid defense, allowing only one corner kick.

â€œThese guys have been scoring some goals, (they) scored two against Drake,â€ Klosterman said.
â€œThey beat some pretty good team this year. So we knew they would come straight at us and that is something we emphasized with our guys the whole week â€˜they are going to come straight at youâ€™, they are going to play ball straight at youâ€™, â€˜youâ€™ve got to stay together, stay connected, play tough, drop when you have to.â€™ So I think overall we played pretty good.â€

UNO (3-5-2, 1-0-0 Summit) claimed its first Summit League victory of the year with the win. Klosterman said the first win in the Summit League was important but his team has a rough road this weekend.

â€œItâ€™s going to be a big weekend for us (and) a tough weekend for us,â€ Klosterman said. â€œSo hopefully we can even improve from what we did today. I think we beat a pretty big team today and its conference so thatâ€™s huge.â€

UNO travels to Fargo, North Dakota Friday as they take on North Dakota State. Kick-off is set for 5pm. There is a quick around for the Mavs, as they then travel to Brookings, S.D. Sunday for a game against South Dakota State at 1pm. Both games are Summit League games and will factor heavily in where UNO ends up in the standings. 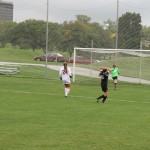 Chelsi Rohloff (6) reacts to a shot which was UNO’s second and final goal of the game. (Photo Courtesy KVNO News)