Omaha, NE – The University of Nebraska at Omaha got the 2013-2014 season underway Monday night at the CenturyLink Center Omaha.

The Mavericks faced the Northern Alberta Institute of Technology in an exhibition game. UNO didnâ€™t seem to take this as a practice game and they came out swinging, out-shooting NAIT 14-6 in the opening period. First a Dominic Zombo goal gave UNO a 1-0 lead. Then in the second period senior forward Johnnie Searfoss got his night started with a power play goal in the 15th minute. UNO scored again three minutes later when junior defenseman Brian Oâ€™Rourke took a pass from senior forward Ryan Walters to give the Mavs a 3-0 lead.

In the final period UNO kept their foot on the gas, scoring three goals in the first four minutes. At the outset Searfoss notched his second of the game on a Brock Montpetit assist to make it 4-0 UNO.

Next, freshman forward Justin Parizek rebounded a shot for a goal and a 5-0 lead for the Mavs. Searfoss then followed suit with his third goal of the game, giving him a hat trick. The Ooks would add a goal later in the period to make the final score 6-1 in favor of UNO.

For the game Ryan Walters and Brock Montpetit had two assists and Montpetit won nine out of 13 face-offs. Head Coach Dean Blais played three goalies, junior Ryan Massa in the first period, freshman Kirk Thompson in the second and freshman Reed Peters in the third. All three had solid evenings with Massa getting the win and Thompson notching 12 saves.

The Mavs were voted last in the preseason National Collegiate Hockey Conference media poll released last month. There is certainly plenty of games to show they belong in their new conference which is loaded with college hockey powerhouses. Up next for UNO is a two game series with Bentley University this weekend. First game is set for Friday night at 7:30 and the second game is Saturday at 7pm. Both games will be played at the CenturyLink Center Omaha. 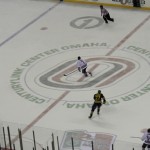 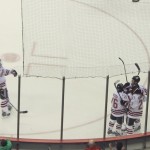 Hansen, Mavs ready to get season rolling « Previous | Next » Mavs stampede Coyotes in the rain 2-0