Omaha, NE – Less than four miles separate the University of Nebraska at Omaha and Creighton University.

It was clear heading into Friday’s match-up who was the dominate college squad and who was the new kid on the block. UNO’s men’s team is in its third year of existence while Creighton is aiming for its third consecutive College Cup Final Four appearance.

The crowd of more than 3,300 at Creightonâ€™s Morrison Stadium was favored 4-to-1 by Creighton fans. The home crowd cheered devotedly as the game began. However, it was the Mavericks who came out swinging. UNO had a five to nothing advantage in shots before the 14 minute mark. The Mavs were the hungrier team in the early going, running down passes faster, tackling hard and trusting each other in the heat of the moment. Senior goalkeeper Matt Grosey spoke of the importance of the game with CU.

â€œEspecially with Creighton being I would say the dominate soccer team in the area for quite some time,â€ Grosey said. â€œNow that we are here we want to be that noisy neighbor. We want to be that neighbor down the street that causes problems. When we played them in the spring game we beat them 2-1 that was big for us, (which) got our moral up a lot.â€

Grosey had several big-time saves during the game. He had three saves during one two-minute span in the first half. But it was the Bluejays who made the first move to the scoreboard. Once the CU offense settled down they were able to net a goal in the 38th minute by Zabarle Kollie.

Jamaican native Vance Rookwood scored a goal for the Mavs in the 75th minute to tie the game 1-1.
Assistant Coach Tim Walters said Grosey is an important part of Mav soccer this season.

â€œHe has kind of been the rock of our team,â€ Walters said. â€œYou know what you are going to get out of him. He is a great shot-stopper. He keeps us in games that sometimes we donâ€™t deserve to be in and (he) can win us games. He is fired up, he go these guys going in the summer and he played great against Creighton in the spring and played great against Penn State last weekend and he is going to be the guy to look out for this year. He is going to do a good job for us.â€

The game eventually ended in a 1-1 draw. Head Coach Jason Mims said with a game against Grand Canyon looming he is glad his team is taking steps forward.

The Mavs start regular season play with a game against Grand Canyon University Friday. Kick-off is set for 5:30 pm from UNO soccer field on 78th and spring streets in Omaha. 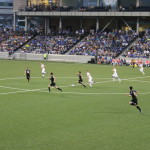