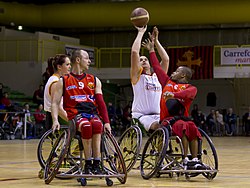 Omaha, NE – The U.S. Paralympics National Wheelchair Basketball team won the bronze medal in the 2012 Paralympics. They are looking to get the gold in the 2014 World Championships and that starts training in Omaha.

Omaha, NE — Game one of the College World Series hasnâ€™t been played yet, but that certainly hasnâ€™t stopped the fun at TD Ameritrade Park.

Omaha, NE — The Omaha Community Playhouse continues its run of the classic The Wizard of Oz through June 30th.

Omaha, NE – The Hoosiers of Indiana University are making their first ever trip to Omaha for the College World Series this year. It marks the first Big Ten team to make the trek to Omaha since Michigan did in 1984.

Omaha, NE — Medical tourism may be on the rise, but experts warn of the pitfalls.

[audio:https://kvnonews.com/wp-content/uploads/2013/06/mayor_speech.mp3]
Stothert, who defeated Jim Suttle, was joined by family, friends and supporters to celebrate the beginning of her four-year term.

â€œThank you all for believing in me,â€ Stothert said. â€œI am grateful and I will work every day to earn your continued trust and your confidence.â€

Stothert expressed optimism about Omahaâ€™s future and stressed a â€œfor the people, by the peopleâ€ agenda. She vowed to stick to her principles by being transparent, listening to the people she represents, respecting differences in opinions and having high standards.

â€œThe people of Omaha have a spirit of progress and we will rely on each other and we will work together to make positive changes,â€ she said.Â  â€œThis attitude will endure and our city will improve because of it.â€

She was met with a round of applause when she acknowledged sentiments on her historical achievement.

â€œI am honored beyond words to serve as the first woman mayor of Omaha and I am determined to serve in a way that can provide any individual regardless of their race, gender, their color or their creed the confidence to pursue their goals,â€ Stothert said.

Governor Dave Heineman emphasized how important Omaha and the metro area are to the state and encouraged Stothert to make a difference for the citizens of Omaha.

â€œWe need and we expect the Omaha metropolitan area to be a leader for economic growth,â€ he said. â€œYou have in the past, and I am confident that you will do even better in the future.â€

Gov. Heineman said he wants to strengthen and enhance the partnership between Omaha and Nebraska in the areas of job growth, crime reduction and education.

â€œWe want to work with you to find common ground and common sense solutions that are mutually beneficial to both of us,â€ Heineman said.

New councilmembers Richard Pahls and Aimee Melton were sworn into Omahaâ€™s City Council along with five others. Pete Festersen was elected as president and Ben Gray was elected as vice president of the council.
Comments Off on Mayor Jean Stothert sets high standards