Excellence is one of eight non-cognitive skills that students will have to develop during the program. (Photo Courtesy KVNO News)

Omaha, NE — Omaha native Ean Garrett knows a thing or two about changing the world.Â The author and motivational speaker has traveled the country as a spokesperson for a program called the MENTOR/National Mentoring Partnership after receiving his law degree from UNL.

And now he is giving back to the place he calls home through a series of workshops he created called Infinite 8.

Currently, Garrett is working with students in Creighton Universityâ€™s Upward Bound Summer Academy. The usual eight-week program was shortened to five for these students. Each week they practice two skills. By the end of the academy they will have focused on self-discipline, self-responsibility, persistence, fearlessness, excellence, foresight, character and humility.

Maria Hill, 15, feels that the program will help her now and in the future.

â€œI feel like I have benefited most from the self-discipline lesson,â€ Hill said. â€œI have no self-control. When I speak I donâ€™t really filter myself and so that has kind of helped me refrain from saying things that could hurt people.â€

Garrett said the idea for Infinite 8 came about as a way to address what he regards as issues associated with a decline in community morality. His own experiences growing up would ultimately drive him to pen his debut book “Rebirth of a Dream,” which chronicles what he has done to overcome tragic incidents in his life. He promised himself that no one would grow up like he did, if he could help it.

Garrett has given new meaning to the popular rubber wristband fashion trend through Infinite 8. Each skill is embossed on a black wristband that students wear to remind them of their goals for the week.

The program, which began in 2011 at Northwest High Magnet School, may still be in its infancy, but Garrett sees it becoming a global phenomenon.

â€œLooking ahead I definitely see it spreading on an international level thatâ€™s the end goal,â€ Garrett said. â€œIf we can motivate the masses to help themselves and their own environment and to realize their full potential then regardless of whatever problems we face in the future weâ€™ll have the tools necessary to overcome those.â€

Garrett said his passion for helping people brings him an immeasurable amount of satisfaction. 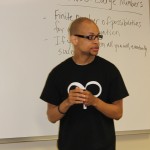 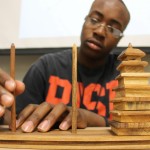 Austin Pena,17, tries to solve the Tower of Hanoi during an exercise about persistence. (Photo courtesy KVNO News)