Omaha, NE — Game one of the College World Series hasnâ€™tÂ been played yet, but that certainly hasnâ€™t stopped the fun at TD Ameritrade Park for manyÂ Nebraskans and a lot of out of state collegeÂ baseball fansÂ looking for a good time.

Crowds poured into theÂ stadium Friday morning in hopes of snaggingÂ a couple ofÂ autographs and perhaps even a fly ballÂ from their favorite team.

â€œI graduated from the University of Louisville so weâ€™ve been Cards for life,â€ Lee said.

The family decided to attend their first College World Series following the Louisville and Vanderbilt game. Â They plan to tour the city before heading back to Kentucky.

â€œThey want to go to the Childrenâ€™s Museum and the Old Market,â€ Jennifer said.Â  â€œWe have heard about a few things that sound interesting.â€

For many in attendance, the College World Series in Omaha is a cherished family tradition that they look forward to every year.

â€œWhen we first started coming it was lightly attended and they used to let us run onto the field after the championship game was finished,â€ said Omaha native, Lou Domenge. Â â€œTo us itâ€™s the biggest week of the year when the World Series comes here.â€

Jessica Nielsen has brought her children and others from their neighborhood to the OmahaÂ Fan Fest the past three years. She said the family friendly event is a lot of fun for everyone.

Cameron Gordon,11, loves playing baseball. He hopes to receive a baseball scholarship and play in the big leagues.

â€œI like playing baseball and I want to get to this stage in my life and play in the College World Series in front of my hometown,â€ Gordon said.

The College World Series and OmahaÂ Fan Fest will wrap up with the Championship Game on either June 25th or, ifÂ necessary, the 26th.

The Malones traveled from Louisville,Ky., to see the Cardinals play.

A group of children enjoy snow cones at the Omaha Fan Fest. 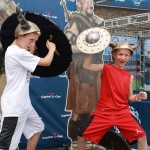 A few fans strech with the Indiana University baseball team during their practice.

The Indiana Hoosiers stretch before practicing.

John Schulte,7, wears a pair of gloves given to him by Danny Hayes, Oregon State baseball player.