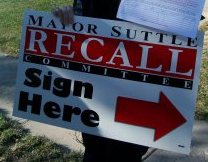 Suttle didnâ€™t appear in person at his hearing in Douglas County District Court.Â  He left it to his attorney, Vince Powers. The suit, filed by Suttle, sought to delay the release of the results of the recall signature count by 15 days.Â  The reason? They claim fraud in the collection of signatures. Suttleâ€™s counsel wanted more time to gather more evidence to support that claim. Powers submitted into evidence several videos claiming to exhibit improper behavior by petitioners. Speaking to reporters outside the courthouse, Powers said they will continue to seek evidence despite the ruling.

â€œThis actually says you shall not accept a signature unless youâ€™ve read the defense statement,â€ he said. â€œWe know that didnâ€™t happen, we donâ€™t know the extent of how much that happened. We also have concerns about whether the circulators were paid. We have a number of concerns, and we just have to investigate.â€

Opposing Suttle were, initially, three motions to dismiss the hearing. But all were denied and the hearing proceeded as scheduled. In the end, Judge Batallion said he saw no reason to interrupt the established processes during a recall. Douglas County Election Commissioner Dave Phipps said his office did not need more time to finish the count.

â€œWe just continue doing what we need to do, and continue verifying for the rest of the week,â€ he said. â€œTechnically, we have until Saturday, but we hope to announce on Saturday exactly what the consequences of our investigation is.â€

If the Election Commission certifies the petition, Suttle will likely file another motion to delay a recall election. A hearing for that motion was tentatively set for December 20th.Â  For now, everything in the recall effort hinges on the number of valid signatures returned by the Election Commission.Â  And for that, we have to wait until Phippsâ€™ announcement.

â€œAll I can tell you is weâ€™re working through it,â€ Phipps said, â€œand we expect to be done in time to announce on Saturday.â€