Omaha, NE – Omaha Mayor Jim Suttle will be receiving a certified letter in the mail this week, calling on him to either to resign or face voters in a recall election. By passing three tax hikes for next yearâ€™s city budget, and making a series of PR blunders, Suttle ignited Omaha votersâ€™ anger. Before the recall effort was deemed to have sufficient signatures on Saturday, Suttle sat down for an exclusive 30 minute interview with UNO Television to make his case to voters. The full interview airs on The Knowledge Network this week. Hereâ€™s a previewâ€¦ 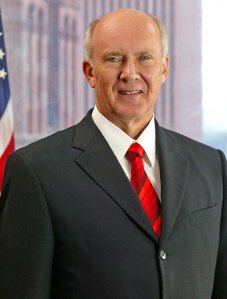 When Suttle was elected in May, 2009, the economic crisis had not yet fully hit the city, and voters were relatively apathetic about the election. But 18 months and three tax hikes later, voters who stayed home then are now pledging to come out and remove Suttle from office. The Mayor Suttle Recall Committee collected over 37,000 signatures in the recall petition drive â€“ thatâ€™s almost half the number of voters who turned out last year. Of those, Douglas County Election Commissioner Dave Phipps said 28,720 were valid â€“ enough to put the recall on the ballot, unless legal challenges are successful. Suttle sat down to defend his record with host of UNO Televisionâ€™s Consider This, Cathy Wyatt.

CW: When you read the headlines, â€˜new mayor elected: does Omaha careâ€™ and turnoutâ€™s expected to be 31%… And now, where we are today, as you are going through this, talk to us from the votersâ€™ perspectiveâ€¦ because it didnâ€™t seem like a whole lot of people cared at that point. And nowâ€¦ folks are stepping up and in fact coming out of the woodwork who didnâ€™t turn up at the polls to voice their opinions about, maybe not you personally, but your performance, certainly.

JS: I think we start with the fact that we have not been communicating that well with the public. They need to know the real stories at city hall and what we really have done with solutions that will impact their pocketbooks in a positive way from here to the next decade. So I take that on my shoulders, that we need to spend a way to get better messaging out, and we will do that.

Suttle defended raising taxes, even after a now infamous campaign commercial pledging to lower property taxes by cutting waste at city hall. Suttle said he had no idea the depth of Omahaâ€™s economic crisis until three days after he was elected, when former Mayor Mike Fahey sat down with him and reviewed the budget. Part of the problem, he said, was the cityâ€™s massive fire and police pension, which urgently needed to be re-negotiated so the city could restore its triple-A bond rating. Suttle did re-negotiate the contract, although not as austerely as many Omahans would have liked. But he was able to restore the rating, which he calls his proudest moment in office so far. Stories like that, he said, are not the ones that get heard.

JS: We started last January of 2010 $9 million in the hole with our forecasting model. We now have worked that, with our management techniques and so forth, and everything weâ€™ve done, from a $9 million problem down to $640,000â€¦ This is major accomplishments, but the storyâ€™s boringâ€¦ itâ€™s truly boring…but yet, it is factual and itâ€™s real and itâ€™s the type of message that needs to be gotten out to the voters who are the real shareholders of this $600 million corporation called the city of Omaha.

We need ideas, answers, solutions that are real, and that are legal and that are practical to fit each of the problems. We have a lot of rhetoric out there. We have a lot of rhetoric for the sake of rhetoric that is designed by some individuals just to promote the chaos. We donâ€™t need chaos, we already have enough of that, so letâ€™s bond together.
Wyatt gave Suttle a chance to share some of his personal story, and re-introduce himself to voters. A grandfather of five, Suttle said he falls back on his civil engineering training to identify problems and find solutions.

JS: I want to do a good job. I put in 12-14 hours a day. I think about our problems. Iâ€™m very intense when I get into those problems, and thatâ€™s what Iâ€™m good at. What we need to spend more time on is how do we communicate the real successes that we have accomplished in 18 months? And as my health holds up and as I prove myself, that we can make this city function and function better and maintain the quality of life, the voters will be the ones to finally decide on my longevity in office.

The full interview with Mayor Suttle airs this week on The Knowledge Network (Cox 17/Qwest 74).

Johanns weighs tax deal and deficit « Previous | Next » Why do seniors fall?