Lincoln, NE – This week, NET News has been reporting on a homicide investigation when an innocent man confessed to a double murder he did not commit. Â Itâ€™s part of the documentary CSI On Trial airing on NET Television Friday, Nov. 19. The audio series of CSI On Trial is archived belowâ€¦

Jessica Reid is serving a life term for the murder of a Murdock, NE farm couple in 2006 (Photo courtesy NET News)

What goes through the mind of a murderer facing off with police in the interrogation room? Bill Kelly talked to a young woman in prison for life. She and her boyfriend killed a farm couple in 2006. In the first of three stories about interrogations and polygraphs, we listen in as two detectives get a murderer to confess.


After 20 years in prison, six people from Beatrice, Nebraska were set free, found to be innocent in a murder case. They had confessed to a crime they did not commit. How that happens is difficult for most people to comprehend, but it happens more than we realize.

This is the story of another false confession case that unfolded after the murder of a farm couple in Murdock, Nebraska in 2006. 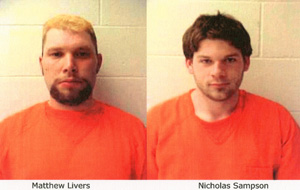 Matt Livers spent months in jail, after confessing to a crime he did not commit. Nicholas Sampson was also wrongly implicated in the crime. (Photo courtesy NET News)

As part of his research, Bill Kelly discovered that questions have also been raised about the accuracy of the lie detector test given the homicide suspect that led to his arrest. Â In the final segment of the series, Kelly looks at how this commonly used device has led to false convictions.