State Treasurer is one of five state government officers elected by Nebraska voters statewide. While voters are selecting a new one in this Novemberâ€™s election, theyâ€™ll also be deciding if itâ€™s the last to be elected.

Last session, the Nebraska Unicameral passed a measure to put the question on the ballot. State Senator Dennis Utter introduced it and argued the State Treasurerâ€™s office can be eliminated and other agencies can take over its responsibilities. 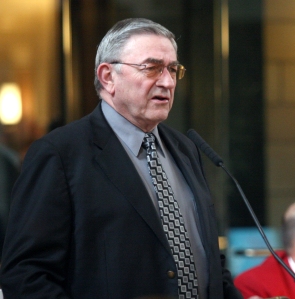 â€œWe have the Department of Revenue that handles an awful lot of Treasurer-type duties in terms of receiving monies that come to the state,â€ Utter said. â€œThe Department of Administrative Services disperses those funds, writes those checks.â€

The Treasurerâ€™s duties include processing child support payments, overseeing the state college savings program and locating owners of unclaimed property. Utter was joined by 37 colleagues in placing the Constitutional Amendment on the ballot. Itâ€™s hard to know for sure, but Utter said he believes eliminating the office could save about $500,000 a year. State Senator Arnie Stuthman and seven colleagues opposed the amendment. Stuthman said heâ€™s all for having efficient state government, but wonders if those agencies that could take over duties of the Treasurer would be a better place to streamline.

â€œIs it really true that they can do it?â€ Stuthman asked, â€œOr will they accept the job and then have to hire additional people to do the job?â€ â€œAnd if they have enough staff to take care of it already, maybe they have too much staff already in those organizations.â€

Stuthman said he hopes voters will reject this amendment so they can continue electing the stateâ€™s chief financial officer. 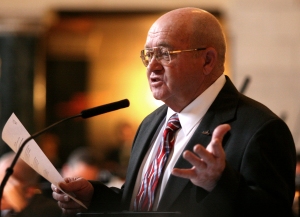 â€œI think the people speak, when they elect a position to take care of those duties,â€ he said, â€œAnd itâ€™s the responsibility of that elected person to â€¦ run an efficient office.â€Â But Senator Utter countered the ballot issue gives Nebraska voters a chance to streamline state government.

â€œI think itâ€™s important to the citizens of Nebraska that we do these things and many more to, in the end, offer the services of state government in a more efficient, effective manner and lower the tax burden to Nebraska citizens.â€

A decade in, a decade out « Previous | Next » Meister: HHS "horribly broken"