The University of Nebraska Regents approved a $56 million plan to expand Memorial Stadium Oct. 15, along with another $9 million to pay for the Huskers’ move to the Big 10. 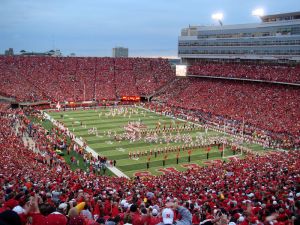 The Regents unanimously approved plans to expand the Husker stadium by about 5,000 seats, boosting capacity to 90,000. The plans, announced last week by Athletic Director Tom Osborne, would generate $7 million in revenue annually for the University. That multi-million dollar project comes on the tail end of another hefty price tag: the $9 million fine NU will pay to the Big 12, also approved unanimously by the Regents. The stadium expansion, set to be completed in 2013, will be funded primarily from reserves in the Athletic Department’s budget, and so will much of the Big 12 penalty.


At the NU Regents meeting Friday, University of Nebraska-Lincoln Chancellor Harvey Perlman said it’s fair, and could have been higher. “When we decided to make the move, we contemplated that there was at least the possibility that we’d have to pay $19.4 million, so obviously we think it was worth it there, and we think it’s worth it under the current arrangement.”

Perlman said about $2 million could be required from the University’s academic budget to cover the fine. Those are funds we don’t have to other things, he said, and some things may fall by the wayside. But, he said, no academic programs will be cut.